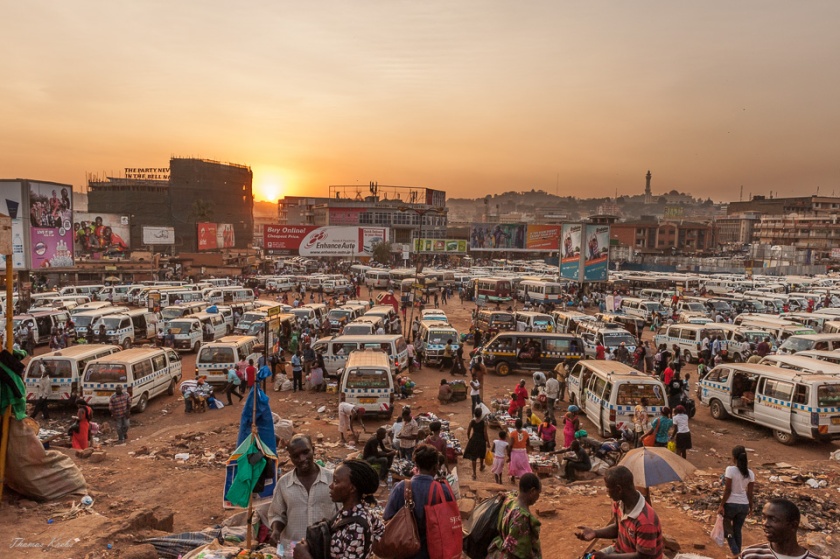 Park Enkadde is the space that exists in downtown Kampala and it is a central place where you can go to find public transportation. It is not the only place but usually taxis traversing particular routes can only be found there so sometimes you cannot help it but go down to the park to board a taxi to wherever you may be going. Whenever I have to go to the park, immediately caution sets in; you just know you have to be extra careful with yourself because you are seemingly entering a danger zone. Suddenly you are mindful of where you are, very aware of the environment you are now in. This, you do not do when you are walking along Kampala road, for example; holding your bag tightly against your body, gripping your phone in your hand, some people do not even pick up calls and if anyone is walking so close to you, you actually look at them to ascertain that they are not trying to pull a fast one on you. We have been conditioned to think and act this way because of what we may have experienced or what we have heard about the experiences of those close to us. Anything can happen, in a split of a second your property could be snatched from you.
Park Enkadde is like a hub where most wrongdoers harbor, prowling around looking for their next victim. It kind of reminds me of the words from the Holy Scripture that make reference to how we should be “Be well balanced (temperate, sober of mind), being vigilant and cautious at all times; for that enemy of yours, the devil, roams around like a lion roaring [in fierce hunger], seeking someone to seize upon and devour. I have always wondered why the crime rate is that high around the park area even with the existence of a police station in the vicinity. But then again I guess it is a livelihood to some of them so getting caught is part of it, you just got unlucky. Only when you are far away from the park can you relax.

I like that there are multiple entrances to and from the park, you just have to be careful that you are in harmony with everyone in the park. By this I mean that you have got to take care that you are carefully dodging the men carrying those large heavy loads on their heads, then making sure you stay out of the way of the taxis moving in and out of the park, extra care should also be taken not to step on the traders’ merchandise as you are liable to pay for any damages. But the most exhausting task is to look for the stage where the taxis going to your area of interest are parked, as if you are not familiar with the park as a whole, you may end up traversing the whole park looking for the stage.

I had an experience once. One evening I had to drop an important document to a colleague who lives in Namugongo. So I figured I had two options; either board to Kireka and get another taxi to Namugongo or go to the park, pick a taxi going directly to Namugongo and considering the traffic jam that exists on most evenings, I thought the second option would save me time. So I find a tout calling passengers going to Namugongo, the taxi was about to get full so I quickly got in. Now, normally you have a rough idea about the general direction the vehicle will be taking to your destination and so when this taxi exited the park and headed towards Shoprite, alarm bells went off in my mind but I brushed it off as a trick the driver was using to try and beat the jam by using an alternative route. I even plugged in my earphones and listened to some music.

After that long wait at Shoprite, the taxi sped off as if heading to Mukwano road and I was happy that I did not panic, that I was actually right. However, my delight was short-lived as the driver took another turn. That’s when I knew I was in trouble! It was at this point that I asked my immediate neighbor, “Excuse me sir, where is this taxi heading?” He replied, “Namuwongo”. I just found myself yelling, “Conductor, mu maaso awo,” loosely translated as “Conductor, stop the vehicle, am getting off.” In my haste to get to Namugongo, I had boarded a taxi going to Namuwongo. These stages are actually next to each other despite the slight similarity in their names. Something should be done about that.

It was bothersome because on top of paying for a wrong journey, I then had to find another taxi back to the park to board another taxi to Namugongo. My only relief was that I had more than enough money to get me to where I was supposed to have gone in the first place.

A bibliophile, and although I like the world to make sense, I also want it to retain its soul. Being creative is not a hobby, it is a way of life. View All Posts

This is a text widget. The Text Widget allows you to add text or HTML to your sidebar. You can use a text widget to display text, links, images, HTML, or a combination of these. Edit them in the Widget section of the Customizer.
%d bloggers like this: